The API 225L Is a compressor by API (Duh). This compressor can be found nestled in an API 7600 Channel Strip or stand alone in a 200 series format as used in, for example the API consoles. This EQ got a large amount of use in broadcast situations because “Regardless of the threshold or ratio settings, the output level always remains at unity. This unique feature allows real-time adjustments without changing the output level”. Even more exciting however, is that the API 225L is also a legendary drum compressor commonly being paired with a 550b or a 550a (as it is in the 7600 Channel strip or the Consoles).

We will be doing a shootout of the API 225L compressor up against:

2 - The Tonelux TX5C - The Tonelux is cleverly designed compressor designed by Paul Wolff (who designed the legendary API 2500 compressor) in a 500 series that can also do feedback and feedforward compression (or as it says on the unit - 60’s or 90’s Style compression).
An extra useful feature, especially for current mixing need is that the TX5C has a mix knob for in built parallel compression!

3 - The Protools Dyn3 - just for comparison's sake and because a fair few people have access to this and know what it sounds like so we feel it is a good compressor to use as a control for our semi scientific tests.

If you find this review useful? Can we ask you to like our Facebook Page or Sign up to our Newsletter at the bottom of the page so we can let you know when new ones are available? 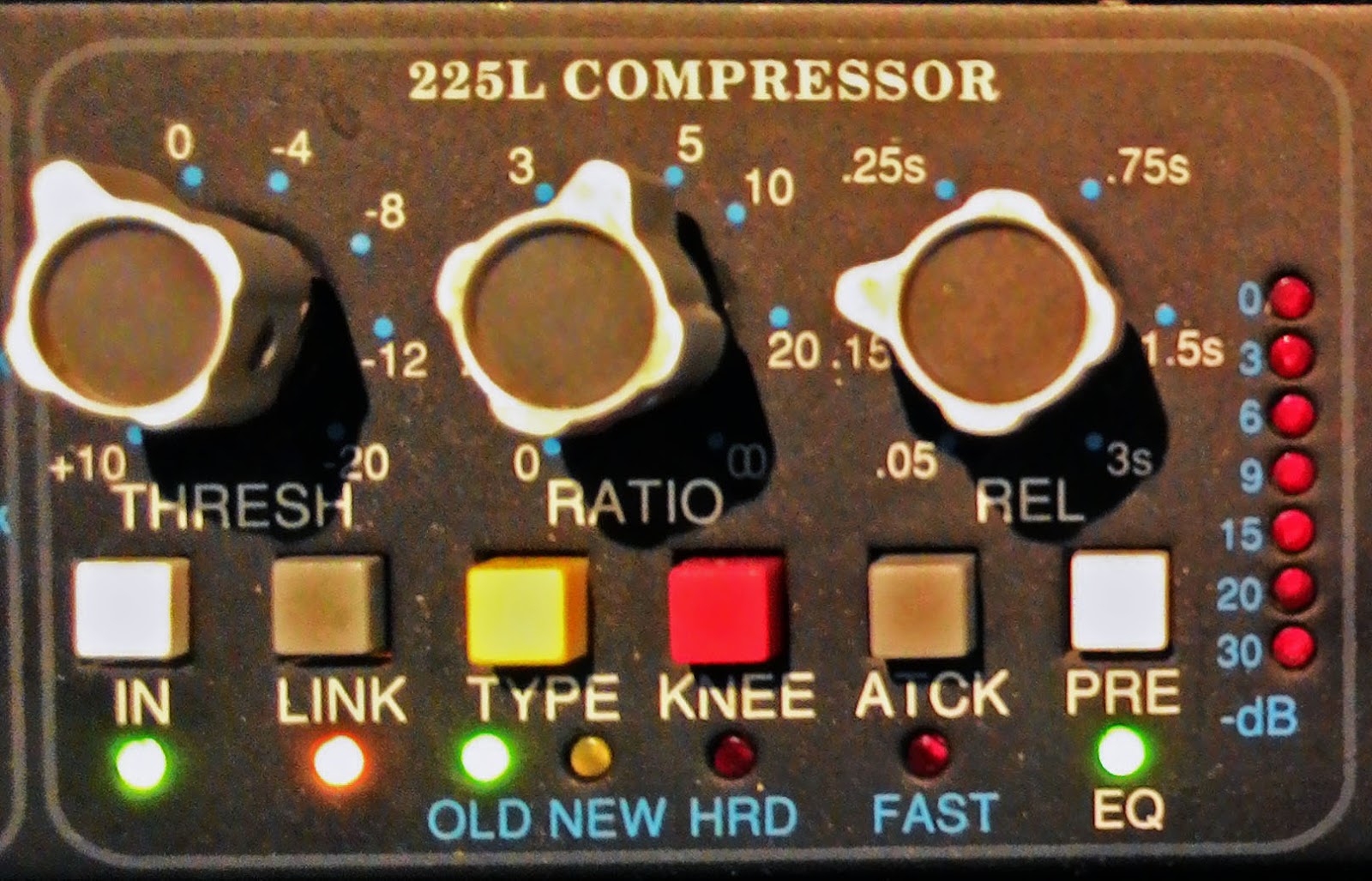 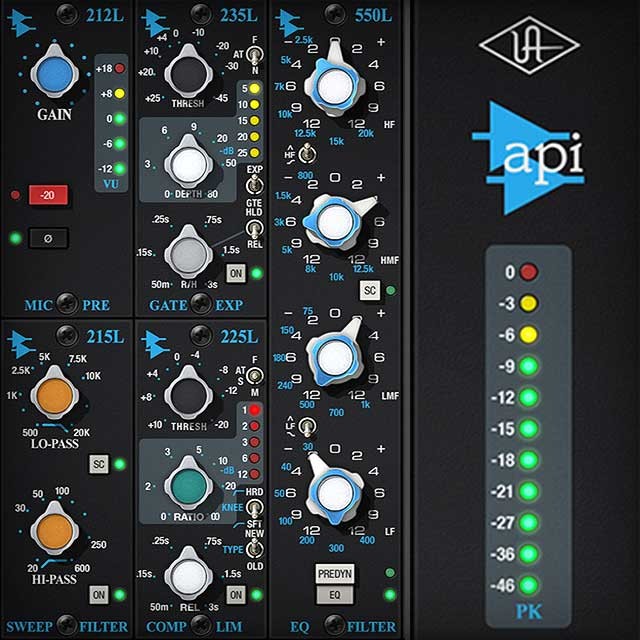 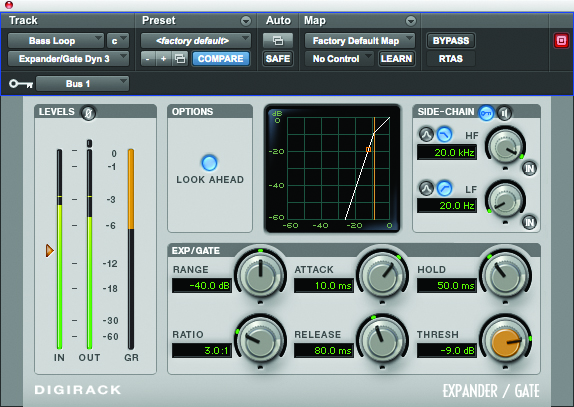 We’ve made a number of presets that you can compare to listen and learn, click the link to open it in a new tab, and then check them out in relation to what we found (below)

Let's compare a decent amount of drum compression on some heavy rock drums - 8:1 ratio with three different attack and release settings to see how similarly or differently they behave.On FAST the UAD is a bit looser in the low end than the API 225L, but they are very similar in the midrange and top end. The Tonelux TX5C shows off its character as a very different style of compressor here, it produces a lot more harmonics and the cymbals are brought, as an overall comment - it is very crunchy and lively. The Pro Tools Dyn3 came out in this test as tonally far closer to the TX5C in the crunch and mid range as opposed to the APIs, although it seems to have less openness and space in the high end than the TX5C.On MEDIUM the API and UAD were very similar - with the UAD having a touch more low mids - listen to the ring and fullness on the snare.The TX5C pumps a tiny bit in a nice musical way - again with raised cymbals - it doesn’t produce as many harmonics as it does with the fast attack and release settings (which is to be expected*). They also show off a better top end and width compared to the Dyn3. The Dyn3 Starts to clean up a lot and not crunch as much with the medium attack and release. The TX5C compared to the API is we think, softer on the transients at this setting - good for bringing up the tone of drums as opposed to the punch on the APIs.

On SLOW attack and release all the compressors are much more similar - the UAD with a bit more lows than the API. The TX5C has the most harmonic content still which brightens up the cymbals and adds some punch to the snare. The Dyn3 seems the softest here and adding the least amount of punch to the kick and snare.

Let's compare some super crushed vocals - as if you were setting up a parallel channel, or just wanted to destroy some vocals….

Across all the settings the API brings the vocals forward the most of all the compressors. Once again the TX5C is the most crunchy and harmonic and seems to raise the high end somewhat - especially at the fast attack and release settings (Listen to the crunching on the sibilance).On such fast settings with this much compression the Dyn3 starts to fault. Whether the plugin is internally clipping or distorting and phasing in a weird way we can not say - But it is not pleasant compared to our other options.The UAD 225L is very very close to the original API 225L but it slightly lacks that forwardness and slight extra smoothness that the real API has in the mid range, (thank you real transformers?).   Will you notice this difference in a mix? Maybe not on an individual case, but you could reasonably expect this slight difference to be amplified if you were using say 8 channels all summed. [This will be a future test we’ll aim to carry out when we get time].On the slower attack and release settings the Dyn3 does not exhibit the same problems it has with the fast settings. It comes off a bit similar to the TX5C but without as much colour and width.None of the compressors pump distastefully which is good :)

A comparison at a few different compression amounts from 4:1 ratio to 20:1 Ratio

At the low settings API adds the most width to the track.In this test the TX5C really shows off where it creates most of its harmonic content - compared the the API 225L it generates a lot more harmonics in mids/lower mids. The signal retains a lot of presence and does not mush up despite the apparent boost in these areas.

The API 225L and UAD 225L are very similar across the frequency spectrum with the API 225L having slightly more presence and higher frequency content.

At the highest compression ratio the API and UAD exhibit the most low frequency content and appear to stay more balanced across the frequency spectrum, whereas the TX5C tilts a bit favouring the high frequencies and rolling the lows off a touch.

What we think from the shootouts -

In line with our other reviews comparing the analog original against the emulation plugin we still find that the original has particular aspects that the plugins don’t quite capture (particularly in the high end and ‘space’ or ‘staging’).   That being said, once again UAD have got it so close that we think, for an individual instance in a mix you might not, unless you have been hybridized with a bat notice which is which (perhaps another idea for a test to steal more of our time - feel free to remind us to do it).   This (so far from our own, anecdotal experience which may be subconsciously biased) is not the case when stacking up multiple instances (e.g. 4 channels of API 225L vs 4 channels of UAD 225L) where we seem to find that the analog gear steps ahead of the plugins.

It was interesting for us to have compared the 225L to the TX5C, a compressor by an ex API designer (Paul Wolff) that retails at roughly half the price of the 500 series API compressors (e.g. the 525 and 527).   They are definitely quite different beasts, and comparing the TX5C to the 225L gave us some new ideas on what we could use it for and we think that it punches above its price range in many ways (check it out against a few other 500 series compressors in Gearshoot).   It’s been a particular favorite for us on acoustic guitars for what it does to the top end harmonics so is worth checking out that side as well.   The TX5C is a harmonic beasty and can crunch stuff nicely when pushed, but doesn’t quite have the midrange forwardness that you can generate from the API 225L.

The Dyn3 does exhibit some of the problems we remember from when I used to have a much lesser choice of plugins in our inventory - It’s not the cleanest digital compressor around and you do have to be very wary of how fast you push the attack and release because it can get a bit nasty.   The more it compresses the more problems we found, for example on vocals where it seemed to get a bit phasey.   So if you don’t push it too much it is okay, but it definitely doesn’t stand up with the other tested options at more extreme levels.   That being said, if you play around with it a bit and focus on its strengths you can do a great job with it, but from our tests, it is no API 225L (which API are probably happy about).

Listening tests and assumptions are determined, double checked or signed off at Gearshoot HQ on ATC110ASL Pro monitors.   We reckon that they give us a pretty good chance at getting it pretty well in the ballpark of what it is going to sound like on most other people’s monitors.   We also headphone check on Extreme Isolation EX-29’s to hear what is going on in that spectrum.

Handy extra things to check out -

Here is a graph of a 1000Hz 5dB Boost through the gear to show the different characteristics that a harmonic distortion graph shows.   The solid line is the main signal, the heavier dashed line the second harmonics and the lighter dashed line represents the third harmonics.

Check out the API 225L Here

And for further info on the Pro Tools Dyn3 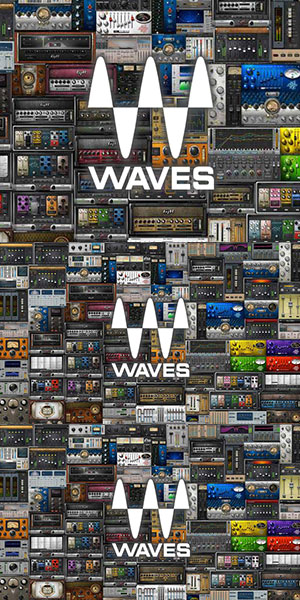