Diode Bridge Compressors are one of the range of type of compressors that any engineer would benefit from having at least a basic understanding of being they have been an integral part of the sound of some of the worlds most classic recordings.   Known for their ability to provide warmth, and when pushed a really nice form of distortion and harmonic richness probably the most famous of this style is the Neve 33609 compressor/limiter.   These type of compressors have been a popular choice for buss compression and also for mastering engineers.

Due to the nature of this type of circuit it is a real skill for a designer to make a diode bridge compressor work at its peak performance, matching diodes etc.   Noise can be a big issue for this style if you don’t do it right, with gains of 50dB required after the diode bridge in the Neve 2254.   This challenge may partially explain why other types of compressors, such as VCA overtook them in popularity (at least for manufacturers of gear).

However, there is something special in the complexities of the tones and feel that you can create with Diode Bridge Compressors, which is why we think they are one that deserve to be widely known and often considered a first choice in your compressors arsenal.   This complexity is also evident when considering the plugin equivalent of the analog outboard versions which require much more processing than your standard compressor plugin.   And that, we think is a hint on how special this mode of compression is.

So for this shootout review we are going to compare 3 types of Diode Bridge Compressors.

Buzz Audio DBC-20 - A modern high end take on the format that uses an adaptive ratio (like a Fairchild does).   Tim at Buzz Audio also developed a “new take on vintage audio compression with a gain reduction element of silicon diodes in a transformer coupled balanced bridge arrangement.”   They specially designed a radio steel laminated transformer, which adds to the colorful harmonic content when you push the unit.

Lindell 254E plugin - based on the Neve 2254 diode bridge compressor, another classic that provides a colour and warmth characteristic with this type of circuit design.

Here is what they look like. . .   If you want to go direct to the SHOOTOUTS CLICK HERE 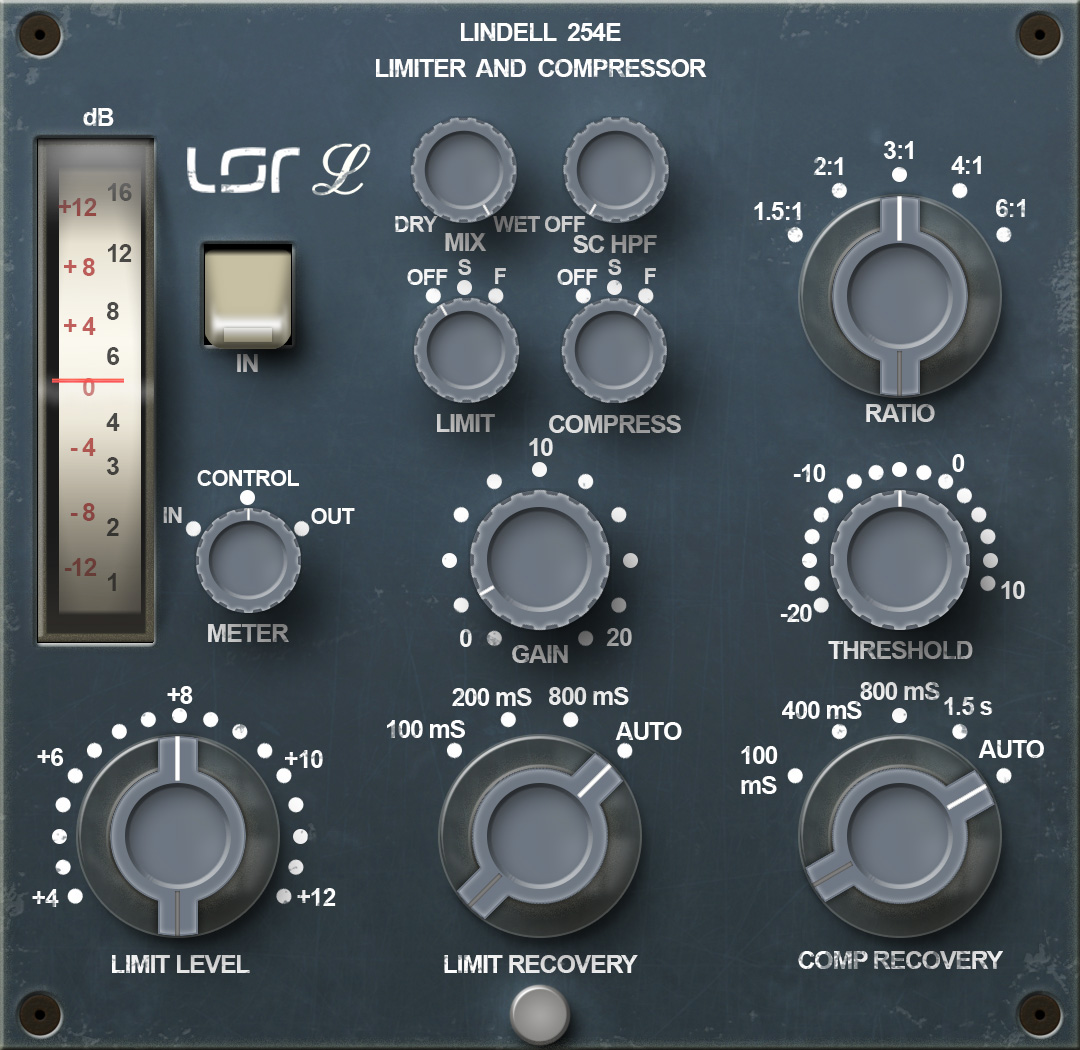 In this shootout the UAD Neve 33609 seems to be the most forward and pulls up the most harmonics. The Buzz DBC-20 is not as forward sounding as the UAD and sounds a bit flatter across the frequency spectrum but with the characteristic analog open top end compared to the plugins, it also seems to be and truer to the original signal whereas the UAD has a bit of a characteristic mid push (lending to why it sounds more forward).   The Lindell 254E does not bring the same amount of mid push and top end as the others but is the flattest overall.   Overall we think the DBC-20 has the nicest top end and depth, which would also make sense in relation to its popularity with mastering engineers.

The DBC-20 really opens out the top end staging of the acoustic guitar strum and makes it feel more stereo than the plugins and has a really nice clarity to it compared to, for example, the UAD Neve (which has a slight push in the lower mids, listen to the balance in the picking sample between the high and low notes).

For the Acoustic Guitar Picking at 6-10dB compression the DBC-20 has a hi fidelity shine and also develops more harmonics than the other units, which is another characteristic that we have found useful in mixes and the internet chatter has also liked.   The Lindell 254E appears to have slightly more mids than the DBC-20 comparatively, and you can hear the compressor working a little more.

Have a listen also on the UAD Neve 33609 for the low end of the pick hitting the strings which it brings up more than the other two.

If you compare how the compressors vary in character at their individual compression amounts on the picking (i.e. 2-6dB vs 6-10dB) you can hear how the DBC-20 steps up from the 33609 and 254E in the harmonics it generates.

The 33609 has the most punch in the lows in the drum (listen to how the balance on the kick changes) it has this at both settings but with the fast attack and release there are slightly more upper harmonics.   Even though the DBC-20 is not achieving this level of low end extension it does have a feature that could enable this, being the Flat/Bass switch*, and of the three, the DBC-20, to our ears creates the most pleasing top end and stereo image.   Again on this test the 254E has the flattest response at both fast and slow attack and releases and a nice mid range slap.

For listening purposes (and because we had sampled it in) we have also included the DBC-20 at 15-20dB of compression to hear how it sounds pushed to this extent.Listen to how different the harmonics are at the fast and slow attack and releasesAgain, this is a nice reminder that attack and release are not only for changing the style of compression but also the sonic character of the compressor.

So for us, the Buzz Audio DBC-20 is our favourite overall - it has the best extension in the top end and a beautiful naturalness (and part of this might also be its analog nature like all the analog gear vs plugins we have so far checked) - The DBC-20 seems to have the most linear addition of harmonics (compared to, for example the UAD Neve 33609 which pushes more in the low/low mids).The DBC-20 also has a really useful characteristic that is is clean and clear at lower amounts of compression (where, as previously said it seems to be popular with mastering types) and then, as you push it into more compression and make-up gain it crunches up very nicely (we really like what it does to bass guitar (go check) and drums at this level).   On the tests we carried out no unpleasant side effects appeared when setting the attack and release fast, it just got more interesting.   The potential versatility of the DBC-20 to a wide range of tonal applications and not just compressing, but also making things sound better is definitely useful.   We confess after first playing with one of these we bought one, and it is one of our front of the cue compressors, especially for a drum buss.

The UAD Neve 33609 really does a good job (as we have come to expect from UAD) and has, to our memory, and comparing to our other Neve type gear, that low mid push that 33609 does so well.   It is definitely a smart choice if you want that characteristic mid push and forwardness on a track that people know and love, and would be great for a drum buss.   Even though we have not got an original Neve 33609 in Gearshoot (yet), with how nice the UAD 33609 sounds, and based on our experience of how close UAD can get their emulations to the originals we would not hesitate to say that it may also be pretty faithful to the analog version - But that may be a statement better kept for when we get a proper comparison of them up, we’ll hunt one down and update!

The Lindell 254E is the least coloured of the three with the most linear frequency response it seems from our tests.   It has a really good sonic consistency at different release settings, which is useful if you want a faster release without pushing up the harmonics too much - the original Neve 2254 has only one attack (~5ms) but Lindell have added in a second attack that is slower (nice idea) - we will aim to showcase the differences for that in an upcoming review.   It smooths the essing on the vocals nicely, and more than the other 2 compressors, which can be a useful feature to have, and the slight rolling off of the high end gives a nice vintage feel on drums.

Useful extra links to check out

UA Webzine on the modelling of the Neve 33609 compressor/limiter

Listening tests and assumptions are determined, double checked or signed off at Gearshoot HQ on ATC110ASL Pro monitors.   We reckon that they give us a pretty good chance at getting it pretty well in the ballpark of what it is going to sound like on most other people’s monitors.

* On The  DBC there is a FLAT/BASS - which reduces compression sensitivity at low frequencies for more bass punch.