As piece of gear that has stapled itself into the racks of many studios around the world and has cemented itself as a classic we thought it would be a good idea to investigate the Empirical Labs Distressor and make a shootout so you can decide for yourself what you think first hand.

So, the Empirical Labs Distressor is the child of Dave Derr that gained popularity in many genres of music, especially rock, metal and rap. The design incorporated Dave’s love of vintage compressors such as the 1176, Gain Brain* and LA-2A (interesting to note that the 10:1 “Opto” ratio uses separate detector circuitry to emulate optical compressors, such as the LA-2A).

With a bunch of different parameters available, from being able to run the unit at 1:1 ratio for the harmonic colouring of the unit to being able to “Nuke” the signal with different detection and distortion modes it is a very versatile beast, which probably explains its popularity.And as anyone without the budget for, or access to the hardware will be happy to hear, 20 Years after the release of the Distressor, Empirical Labs have been kind enough to release a digital version of this colorful big knobbed piece of gear; The Empirical Labs Arousor!We will be comparing an original analog Distressor unit to the digital emulation, and for fun will throw a vintage Urei 1176LN Rev F into the mix to compare how the Distressor stands up, compares to and takes its own path against the 1176 that Dave loved, that the Distressor was designed with in mind of (but not to copy) and to doubtless use along side of.   We figure also, by understanding the similarities and differences to an 1176 it'll help you cement further your understanding of when might be the best time to use each type of unit, and develop a sonic imprint or feel for where they sit in in relation to each other the compressor landscape.   Feel free to also add in extra compressors to the shootouts we provide that you might also want to compare or understand the Distressor in relation to. 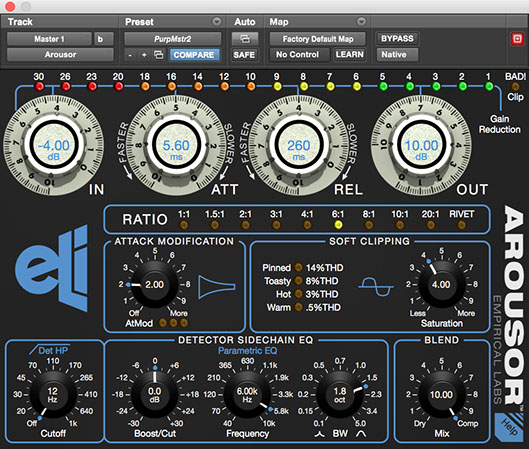 This comparison is good for showing the different harmonic content of the compressors and how they change the overall tonal character. In the comparison both the Distressor and Arousor sound tighter than the 1176 - especially in the lows/low mids. The 1176 retains more of the low end content.The Distressor is ever so slightly more harmonically rich than the Arousor - Most of the difference between these two compressors is shown in how the react differently to the chugging at the end of the loops. The 1176 also adds a bit of width to the signal which is why it also maybe does not come off as tight as the Distressor and Arousor.

A medium amount of compression at 3 different attack and release settings.

In this comparison on the fast settings the 1176 and the Arousor sound more similar to each other than they do to the Distressor. The 1176 and the Arousor do have a different sound in the mid range though - whether this is because of the frequencies that they compress over others or because of the harmonics produced you can decide for yourself, it’s probably lots of factors converging - but they do have a different mid range sound mostly around the 600hz-1Khz area.

The Distressor sounds the most forward and is the most harmonically lush of the three. An interesting thing to listen out for is how the sibilance makes the compressor react on all the different attack and release settings. On the faster settings the Arousor, and especially the Distressor tend to crunch up and add harmonics to the sibilance - so even though the sibilance is getting compressed down it is still staying very present (potentially even more so than before the compression because of those harmonics added).All the compressors follow the usual occurrence of producing less harmonics with slower attack and release settings.Rock Drums

Three different Ratios at a medium attack and release.

At all three settings the Distressor and Arousor are pretty close but consistent with our other shootouts the Distressor being a bit more forward and a bit more punchy than its digital counterpart.   This is consistent with many of our shootouts of analog vs the digital emulation.  If you listen to the difference in the low mids on the snare between the compressors - at 8:1 even though the Distressor seems more bright and forward the snare actually retains more of its low mid content than the Arousor does.The Distressor is the most open in the top end, with the Arousor following in as a close second - The 1176 on higher settings seems to roll of the top end a touch in comparison.

Handy extra things to check out -

Here is a graph of a 100Hz tone at 20:1 Attack Fast Release fast through the gear to show the different characteristics that a harmonic distortion graph shows.   The solid line is the main signal, the heavier dashed line the second harmonics and the lighter dashed line represents the third harmonics.

Extra note re our tests between the Distressor and the Arousor

For Gearshoot we generally aim to work with standardised compression ratios to allow as close as is practically possible (within realistic time etc constraints) comparisons for you.   Now one thing of interest is that when it comes to ratio of the Distressor to the Arousor is this part from the manual of the Arousor plugin "Note: If you wish to match a favorite Distressor Ratio, select the next higher ratio on the AROUSOR. IE 6:1 Distressor equals the 8:1 on the AROUSOR.". And there in lies a certain quandary of comparative analyses... Our general stance is to work within the frontplate of a unit as that is what a general user would default to.   So for our tests, and in relation to every other compressor in our library we have used the ratios as the GUI of the Arousor states them.   So there, in theory is a slight difference between what we report as a e.g. 4:1 on the Arousor to the Distressor... is there between the Arousor and the 1176... who knows... it seems that compression ratio is more of a 'rule of thumb', much like attack is on compressors ;)    If it makes you feel any better philosophers and mathematicians are still debating whether numbers are actually real or merely something we create purely in our own minds. So, you are justified in taking the numbers on gear like compressors with a grain of salt and you will have one less thing to torment yourself about.

Listening tests and assumptions are determined, double checked or signed off at Gearshoot HQ on ATC110ASL Pro monitors.   We reckon that they give us a pretty good chance at getting it pretty well in the ballpark of what it is going to sound like on most other people’s monitors.   We also headphone check on Extreme Isolation EX-29’s to hear what is going on in that spectrum.

Check out the Distressor Here

Check out the Arousor Here