API vs Waves vs UAD vs Volko

In the second part of this API EQ Comparison/Review we will be checking out the API 560 and some of its emulations.The API 560 is a graphic EQ that was originally built for API consoles in the 60s and 70s. With 10 bands extending from 31Hz up to 16kHz in octave ranges. With a large amount of headroom from the 2520 op amp circuit and providing that american API sound. As with the 550a and 550b they also have a proportional Q making them a very versatile tool.

As said in the other review proportional Q means a changing Q. With different boost amounts the EQ has a different curve shape. The larger the boost the steeper the Q.We will be comparing the Analog API 560 to the UAD API 560 the Waves API 560 and the Volko QG.

The original analog API 560 sounds the most clean and punchy of the EQs. The analog API seems to be a much tighter Q than the digital EQs that are emulating it. The is noticeable in the difference in the sub low frequencies between the samples. Listen to how the low subs in the kick change between the EQs. To our ears the UAD has the most sub lows followed by the Volko and then with the Waves being the most comparatively similar in the sub lows. To summarise, the UAD and Volko have a lot more sub lows than the analog API and the Waves API.

The UAD API sounds the most similar to the Analog API 560 in the mid range test. The have a similar amount of brightness and width to them. In comparison the Volko sounds a bit more scooped in the lower mids and not as punchy in the centre due to this. But as it sounds slightly flatter in the centre signal it sounds a bit wider overall. In the Mids range test the Waves API sounds not as bright extending into the top end as the three other EQs in this test, it does not sound as wide overall but has a nice punch to the low mids - listen to how the snare change sin comparison to the other samples.For listening to the width and difference in the top end listen to the cymbals and how their brightness and placement changes in the mix.

As with the mid range test the same characteristics are exhibited with the Waves API EQ. The Waves API560 doesn't have as much top end as the UAD and Analog samples. It sounds like the boost on the Waves API560 extends lower than the other EQs - listen out how the snare on the Waves sample has more guts than on the other EQs.The UAD Sounds the Closest to the Analog API in the top end test. To our ears the UAD sounds ever so slightly bright and harmonic than the Analog API. In terms of the top end and width the Volko is also very similar to the Analog API.

Overall all the EQs sound great in their own way. We prefer the Waves API on the low and and for retaining mid range punch where in the top end the UAD and API are great and the Volko has a nice character in the mid range.The Analog API sounded the nicest overall in this test, being the tightest and punchiest of the bunch!

Check out the Waves API 560

Check out the Volko QG 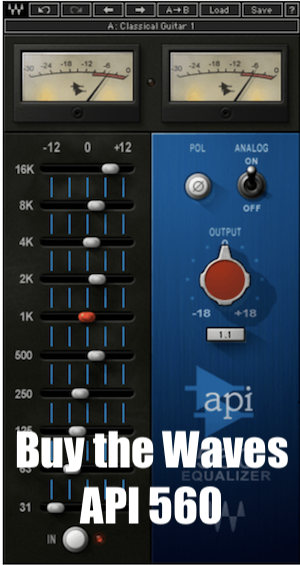