It’s time for a three part mini series...The debate has raged on for years about if DAWs sound different and the reasons or beliefs why. More often in the world of forums and groups now it seems in these discussions tend towards that DAWs have now reached a point where they all sound the same in the fundamental aspects and the difference in DAW is just about workflow aesthetic, usability (open to debate if you realllly feel like it (not the point we are trying to make here though)), and most of all the plugins that you choose to use in them.With that in mind, and putting aside for the moment things like usability and functionality - Do the free tools provided by them like EQs, Compressors etc sound effectively the same, or can they if used substantially define the sound of the DAW? We are not saying you should select your DAW based on the free tools they come with but more so that if you have a DAW you should know how it’s tools sound, work and how you an potentially get the potential strengths out of them and avoid the potential weaknesses. Also it’s a good bit of fun don’t ya think?Through this series we will be comparing some stock plugins from two of the most utilized DAWs. Logic Pro and Pro Tools.So in this first instalment we will be comparing the stock EQs that come with Logic and Pro Tools; the Logic Channel EQ and the Avid/Pro Tools EQ III.   Part 2 and 3 coming soon. 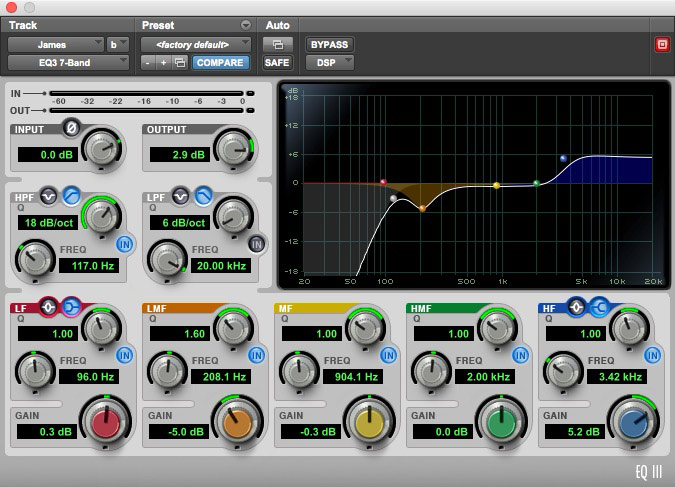 Here they are for your listening pleasure.   If you find this review useful, can we ask you to like our Facebook Page or Sign up to our Newsletter at the bottom of the page so we can let you know when new ones are available?

Listening to the low end boost (100Hz +5) there is very little difference. The Logic EQ stays a bit cleaner whereas the Pro Tools EQ had a little bit more guts in the lows/low mids. This could be because of a little bit of harmonic content or a slightly different shape of curve extending into the low mid (the Q both EQs were tested in with what the DAW states is a Q of 1).Moving on to the high mids (1kHz and 2.5kHz +5). Again there are VERY subtle differences - which is not surprising for two EQs that supposedly very clean EQs. The Pro Tools EQ comes off ever so slightly brighter and wider than the Logic EQ, again this could possibly be because of some harmonic content. Because of this the Logic EQ comes off a little bit warmer and cleaner.We again hear the same thing on the high frequencies. The Pro Tools EQ is brighter and wider with what sounds like a bit of a harmonic push and the Logic EQ is cleaner and smoother.We can’t hear any obvious phase issues in any of these listening tests.

When listening to the mid range boosts similar characteristics appear as in the first test. The Pro Tools EQ sounds a bit more lush due to the probable harmonics while the Logic EQ seems cleaner.With the top end  the Pro Tools EQ has a bit more width and brightness, but the Logic EQ is definitely smoother - listen to the cymbals.

On the top end the same thing is exhibited as on the drum listening test, the Logic EQ is smoother but subtly not as wide and bright as the Pro Tools EQ.

In comparison the Pro Tools EQ does have a bit more harmonic content than the Logic EQ. The Logic EQ is a lot cleaner, but does sound like it has something less solid, or perhaps an aspect of phase problems in the low end.The idea of this test was not to compare these against other EQs but just to compare these against each other. Feel free to pull other EQs into the player to compare against these to see how they stack up, however, just listening to them stand alone they do sound pretty pleasant for clean EQs especially when considering that they are free EQs that come with DAWs that require very little processing power so you can run many instances of them.

Another thing to be aware of is that the more instances of an EQ that you use in a mix the more the particular subtle effects it imparts are probably going to be multiplied, and the more apparent it will become to 'the sound of the DAW'.